Jacek's Wheat Belly Transformation: What Happened to the Comments?

April 27, 2015
Over at the Wheat Belly blog, Dr. Davis posted a "before and after" set of pictures of "Jacek" from Poland, who claimed to have lost 20kg (44 pounds). A few readers commented that things didn't look right: the lighting, clothing and facial expression were all very different in what looked like a photo studio setting, where these could have easily been kept about the same. And Jacek really didn't look that much lighter. 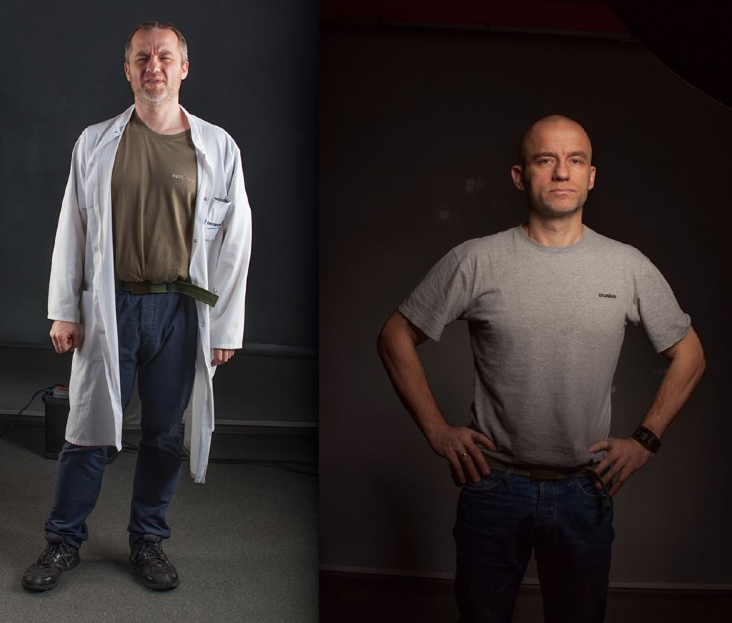 I added my opinion as a former professional photographer: the camera angle, lighting and setting looked professionally done, that the lighting in the "before" photo was coming from both sides, emphasizing texture (like wrinkles), lighting both sides of the face, making it look wider. Side lighting typically isn't used in portraits for these reasons. Jacek was wearing frumpy clothes and had stubble and gray hair in the before photo, things known to make people look ten years older. In the "after" photo, he was clean shaven (head and face), had a normal expression and wore well-fitting clothes. The lighting came more from the front and cast a shadow under his jaw (minimizing any appearance of a double chin) and the side of his face (making his face look thinner). Jacek's neck (width and tone) look the same, whereas most WB before-and-after photos show people with much thinner necks.

Note also that it looks like he's wearing the same belt, but the length of it that's sticking out from the buckle is about the same in both pictures (you can see the shadow of the belt on the jeans in the after photo).

In other words, the photographer knew what he or she was doing, and in my opinion, it was a stunt. A few other readers said they didn't see any great transformation, either. All our comments are gone now.

We have a saying where I work: when in doubt, don't. I generally like Dr. Davis's work and think he has the best interests of his readers in mind. But enough doubt has been cast on this "transformation" of Jacek that the post--not the comments--should have been taken down.

Lori Miller said…
I don't think he's a fraud. I do think his enthusiasm exceeds his judgment sometimes.

IMO, eliminating wheat is so beneficial for so many of us that we don't need any faked results. Anything with a hint of fakery ought to be put in the no-thank-you pile.
April 27, 2015

Galina L. said…
The wheat elimination is very beneficial for many if not for most people,so there is no actual fraudulence behavior, but I am afraid that Dr.Davis could be an easy target for his critics just because his presentations are often on an overenthusiastic side.
April 27, 2015

tess said…
I just looked at his site: the comments are there now. :-) either his site was misbehaving, or he replaced them....

I agree -- Davis's basic work was important, but he seems to have slipped down the self-promotion slope. he'd better be careful, for his career's sake AND the sake of his "mission."
April 27, 2015

Lori Miller said…
Some of the comments are back; some of them aren't.

I agree with you both. A reputation takes years to build and five minutes to tear down. It's better to be cautious than to give your critics a target.
April 27, 2015

Galina L. said…
Unfortunately, propaganda works better than an education, and PR matters.Most people I know who stopped eating bread have read the "Wheat Belly", and they think at the same time that Dr.Atkins is a devil reincarnated.
April 27, 2015