Happy Independence Day, and happy herd immunity. Yes, I know our betters keep harping on us to get a COVID shot, keep haranguing us about variants, and keep the hysteria going. They loved knowing better than the rest of us and telling everyone what to do. But going by all-cause mortality rates and actual science, their fifteen minutes of fame needs to fizzle out. Yes, a virulent new variant could emerge later, but it looks like it's time to enjoy some normalcy and have the coronabros go back into obscurity.

All-cause mortality rates are now at or below the 2015-2019 average for all age groups in the US. They've been close to that average for months in both the US and UK, even though the delta variant accounts for almost all cases in the UK. Click to enlarge images. 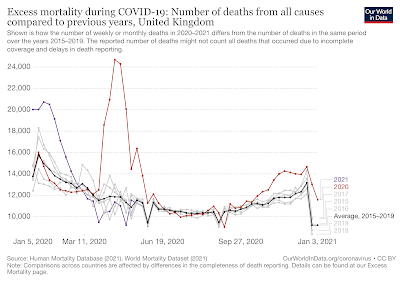 The first chart shows deaths from all causes plunging from January 2021 on in the US. (It also shows there was no "surge upon surge" following Thanksgiving and Christmas gatherings, but an upward trend that started around October.) In some states, deaths started falling off a cliff in December.  The UK followed in February and enjoyed below-average deaths over the spring.
How can that be? Hardly anybody was vaccinated in January! People went to holiday dinners even though Google and a gaggle of governors told them not to go! Dr. Marty Makary, a professor at Johns Hopkins School of Medicine, reminded the natural immunity deniers back in February that the human immune system includes T-cells that can produce antibodies decades after exposure to a virus.
"...the consistent and rapid decline in daily cases since Jan. 8 can be explained only by natural immunity. Behavior didn’t suddenly improve over the holidays; Americans traveled more over Christmas than they had since March. Vaccines also don’t explain the steep decline in January. Vaccination rates were low and they take weeks to kick in.
He cited a study showing that reinfections occur in only 1% of people, and that those infections were mild. He also calculated that far more people had been infected with COVID than antigen tests suggested--two-thirds of the US population by his estimate. A recent NIH study gives some support for this: "researchers estimate nearly 17 million undiagnosed cases by July 2020." The previous estimate was only three million. The Mayo Clinic says,
Experts estimate that in the U.S., 70% of the population — more than 200 million people — would have to recover from COVID-19 to halt the pandemic...Herd immunity also can be reached when enough people have been vaccinated against a disease and have developed protective antibodies against future infection.

Dr. Makary predicted herd immunity by April in the US and he may have called it.

But the variants! I know India and a few other countries struggled with variants--partly because they ran out of supplies for the patients. But this chart from the Spectator UK doesn't indicate such a scenario in Scotland, at least: 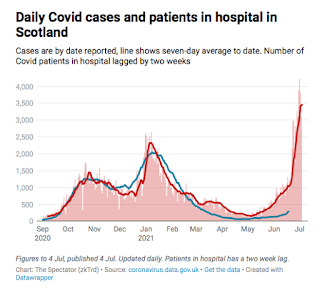 Another chart shows daily COVID deaths for the entire UK in low double digits, down 98.8% below peak. 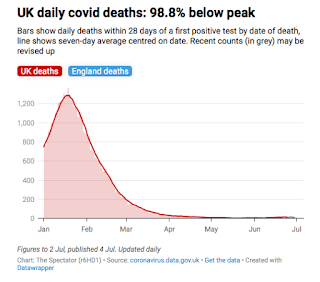 So the busybodies, the finger waggers and the fearmongers can all piss off. If COVID comes roaring back, I can think about getting the vaccine--but if the vaccines don't work against some new variant, there won't have been much use in taking it.

July 13, 2021
I've been stunned by the stupidity today. How do the editor-at-large of the Wall Street Journal , an emergency physician , and the people running an elite school in Washington, DC lack common sense and applied arithmetic skills? It's getting exponentially dumb, as Tom MacDonald puts it. A Wall Street Journal editorial published today said, "If thousands of people were dying from the vaccine, the evidence would be piling up in hospitals and morgues."  No, they wouldn't. Six thousand deaths--the number reported to the VAERS system for COVID vaccines over the past six months--amounts to less than one death per state per day. That's why we have an adverse events reporting system: nobody would notice patterns otherwise. Unsafe drugs get taken off the market without bodies piling up in morgues. Elsewhere in the Journal , a mother writes that her daughter's camp, run by the exclusive Sidwell Friends School, made her nine-year-old daughter wear a mask while pla
Post a Comment
Read more