I keep seeing the same error in the news: you're 25 times more likely to end up in the hospital if you're unvaccinated! It's due to a misunderstanding of relative vs. absolute risk.

For readers who aren't familiar with the concept, I've made a visual aid based on actual figures from Indiana:

Going by the high portion of unvaccinated COVID patients, it makes it sound like you're 50 times more likely to go to the hospital if you haven't had the shot. That's relative risk. If you're at a high risk of getting a bad case of COVID, that's meaningful. But if you aren't, you're reducing a tiny risk to a minuscule risk. 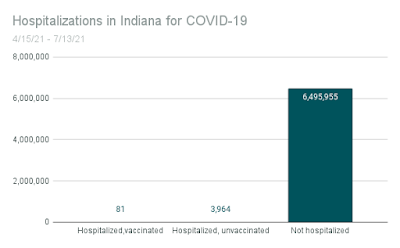 I didn't forget to add the first two columns--they just don't show up in the context of a population of 6.5 million. Likewise, the 655 people who've died over the past 90 days. I'm not trying to make it seem trivial that people have died or gone to the hospital. Rather, it's to give a more realistic picture of risk. Doctors are often in the news or on YouTube telling about the horrors of COVID--but their perspective seems like it suffers from availability bias: they see suffering all day, and almost all of the suffering is among unvaccinated people. But they're homed in on a tiny group of people.

Imagine the homeless for a moment. The vast majority of them are men. If you're a man, would you take an experimental medication that could help you avoid becoming homeless--maybe a medication that makes people more conscientious? It might be worth it for someone at high risk of becoming homeless, but again, for most it would reduce a tiny risk to a minuscule one.

The focus has been on illness for the past 18 months to the exclusion of almost everything else. In a state that has the 14th highest deaths per capita, here's a graph of COVID numbers for those past 18 months. 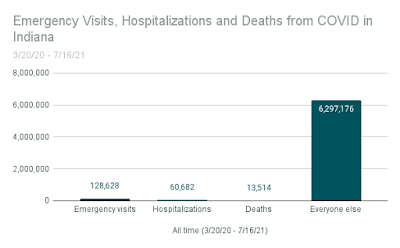 The absolute risk of being hospitalized from COVID is less than 1% per year--more if you're older or unhealthy, less if you're younger or without health problems. Just something to think about if you're prodded to participate in the most hazardous vaccine rollout in memory. Serious side effects of COVID vaccines are rare, but they're not zero, and doctors don't to know how to treat some of them.
On a less serious note, the Babylon Bee understands relative vs. absolute numbers and even infinite numbers.
Sources:
https://www.regenstrief.org/covid-dashboard/
https://www.coronavirus.in.gov

July 05, 2021
Happy Independence Day, and happy herd immunity. Yes, I know our betters keep harping on us to get a COVID shot, keep haranguing us about variants, and keep the hysteria going. They loved knowing better than the rest of us and telling everyone what to do. But going by all-cause mortality rates and actual science, their fifteen minutes of fame needs to fizzle out. Yes, a virulent new variant could emerge later, but it looks like it's time to enjoy some normalcy and have the coronabros go back into obscurity.  Hoping you're healthy as a horse! Picture from Pixabay . All-cause mortality rates are now at or below the 2015-2019 average for all age groups in the US. They've been close to that average for months in both the US and UK, even though the delta variant accounts for almost all cases in the UK. Click to enlarge images. Weekly number of deaths by age in the US. Source: CDC . The first chart shows deaths from all causes plunging from January 2021 on in the US. (It also sho
Post a Comment
Read more

July 13, 2021
I've been stunned by the stupidity today. How do the editor-at-large of the Wall Street Journal , an emergency physician , and the people running an elite school in Washington, DC lack common sense and applied arithmetic skills? It's getting exponentially dumb, as Tom MacDonald puts it. A Wall Street Journal editorial published today said, "If thousands of people were dying from the vaccine, the evidence would be piling up in hospitals and morgues."  No, they wouldn't. Six thousand deaths--the number reported to the VAERS system for COVID vaccines over the past six months--amounts to less than one death per state per day. That's why we have an adverse events reporting system: nobody would notice patterns otherwise. Unsafe drugs get taken off the market without bodies piling up in morgues. Elsewhere in the Journal , a mother writes that her daughter's camp, run by the exclusive Sidwell Friends School, made her nine-year-old daughter wear a mask while pla
Post a Comment
Read more