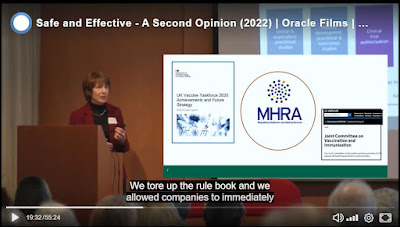 Screen shot from Safe and Effective.

Quoting the British Medical Journal, doctors, researchers, a Member of Parliament, scientific studies and several previously healthy, fit people who suffered disabling vaccine injuries, Safe and Effective makes a damning case against the novel gene therapies developed at warp speed, the psy-op campaign of ridicule and coercion to take them, and the gaslighting of those they harmed.

"You take one for the team. So I took the vaccine. But now the team's running in the opposite direction," says Georgia Segal, age 35, who collapsed after her second Pfizer jab and is now registered disabled.

The documentary features several previously healthy, fit people, most of them young and some of them athletes, who became disabled after getting COVID vaccines. They're not alone: the UK's Yellow Card scheme has logged 432,819 adverse reactions, of which 2,240 were fatal. But they've been ignored and their injuries dismissed as rare or psychological. 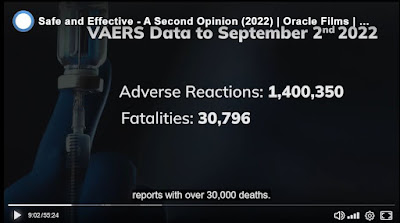 Screen shot from Safe and Effective. VAERS is the official voluntary vaccine adverse events reporting system in the US.

A few of the vaccine victims have received £120,000 in compensation for their losses (including a loss of a leg and the death of a spouse); some have partly regained their health through unconventional therapies. They say most doctors won't touch them and Facebook shut down their support group.

Cardiologist Aseem Malhotra, although not a specialist in vaccines, says it is his understanding that the spike protein appears to be distributed throughout the body in every major organ system for several months (it is supposed to stay at the injection site), causing toxicity or an autoimmune reaction. He explains the difference between relative and absolute risk and why some of the vaccine efficacy claims are based on poor science, noting the funding of official health agencies by industry.

COVID may be over, but the rule book is in the shredder, the injured are still out there, and Safe and Effective itself is shadow-banned on YouTube by being unavailable in Restricted Mode. It's a well-made, one-hour documentary; you can watch it here.

September 27, 2022
A well-known, mainstream cardiologist in the UK is calling for COVID shots to immediately stop until "raw data has been released for fully independent scrutiny." Dr. Aseem Malhotra got a COVID vaccine on TV and encouraged others to get it, too. But when Dr. Malhotra's fit, healthy father died of a heart attack, he started investigating the vaccines. What he found was that for non-elderly people, thousands would have to get the shot to prevent one death; serious adverse events for the shot are around one in eight hundred to one in a thousand (far greater than for other vaccines that were pulled); there was a significant rise in cardiac arrest calls in England and Israel in 2021 that is a potential signal of the vaccine's harm; and that corporations are paying the agencies that are supposed to be policing them.  Dr. Malhotra at a recent press conference on his new paper. Full video here .  None of this is new to most readers, but a well-known, mainstream doctor saying
Post a Comment
Read more

October 24, 2022
Regular readers might remember my bouts with respiratory illnesses: bronchitis that hung on for months, colds that wouldn't go away, sinus infections so frequent that I had sinoplasty many years ago (it didn't stop my sinus infections), and even a week in the hospital with a sinus infection when I was a kid. The sickest I ever felt was when I had the flu at age 17. As someone (maybe Dr. Eades) recently described, I remember where I was and what I was doing when it came on.  Last week when I felt a cold coming on, I figured I'd be sick for several days. I was tired and starting to get congestion and a sore throat. But it went away 12 hours later and didn't come back.  Photo from Unsplash . Maybe it was short COVID. Kidding aside, the only difference is that I've been taking Ideal Immunity , a probiotic made by Biotiquest. (I'm not an affiliate.) Some of the members at Dr. Davis's Inner Circle have been getting incredible results with Sugar Shift lowering thei
4 comments
Read more

August 13, 2022
It can be hard finding prepared foods like dairy, sausage and sauces without emulsifiers (food thickeners). These additives can damage the mucus lining of your stomach, if only temporarily, and allow bad bacteria into your system. That's how Dr. Davis explained what he thought was happening when I talked about it at the last Inner Circle meetup.  Thickeners like carrageenan, guar gum, gellan gum, locust bean gum, even palm oil (used as an emulsifier in almond butter) and others are in foods you wouldn't suspect. I've had to toss out cream, protein powder, cream cheese, coconut milk, deli chicken--I even had to return a package of raw chicken once. Raw chicken! Why does raw chicken need anything added to it but butter, lemon and heat? Are they trying to make people sick? It must have been making me sick because I've felt so much better without emulsifiers and thickeners. I can do physical work without wearing myself out, my palpitations are gone, my puffy face is gone,
4 comments
Read more

Battle of the Barbecue Sauces

June 12, 2022
This weekend, I picked up three bottles of low-carb barbecue sauce with no frankenfood ingredients at Whole Foods to try out. I put them on chicken wings and tasted them by themselves. Results: Good Food for Good BBQ Sauce Classic , 4g carbohydrate per 2 tablespoons. No sugar added, but the dates make it the sweetest of the bunch and with a warm hint of mustard. It's organic, has a very short list of ingredients and no thickeners or emulsifiers. It's a little runny, but I recommend it for people who like a sweet sauce. Who knew Canadians made such good barbecue sauce? Primal Kitchen Classic BBQ Sauce , 3g carbohydrate per 2 tablespoons. This was the lowest in carbohydrates and the tangiest and smokiest, with vinegar and mustard in the mix. The tapioca starch made it the thickest sauce. It's also organic--what else would you expect from Mark Sisson? Recommended for strict carb control and occasions when you need a thick sauce. LocalFolks Foods Hab-A-Q (Habanero Bar-B-Q) , 5g
2 comments
Read more

How to Program a Suteck Yogurt Maker

July 09, 2022
If you have a Suteck or similar yogurt maker, here's how to program it for time and temperature. I've selected 106 degrees because I ferment L. reuteri and B. coagulans together; if you're doing just L. reuteri, set it for 97 degrees.  Thirty-six hours' fermentation is necessary to get high bacterial counts--not just creamy texture.  Enjoy!
Post a Comment
Read more