Finally, Paint on the Garage (and Some on Me)

Something has finally gone right in this one-thing-after-another season of home repair.

The other week, a kitchen electrical outlet went out. This week, it was the microwave. It started zapping like there was metal in it, so I decided to replace it. As a good citizen, I took it to Recycle Force, a nonprofit that recycles electronics. The place is hard to find--it's on a winding, unmarked road that looks like it's part of a different road, and today, the road was closed for construction. After a couple of two-mile trips circling back around--I was not coming back home with the microwave--I saw a little detour sign by an alley, took the detour up over some train tracks, and saw Recycle Force's sign. At least getting rid of the microwave was easier than replacing the bad outlet.

It hasn't rained for weeks here, but since it's supposed to Sunday night, I decided I'd better get the garage primed Friday night so I could paint Saturday and give the paint plenty of time to dry. There was only a little more priming to do, but I still needed to use the drop light to finish. While I primed, I got to listen to some live music coming from the neighbor's party. It looked like it was all outdoors, but without social distancing or masks. Not in line with Indiana's Back on Track Plan, but given these neighbors, the police were probably at the party--as guests.

Finally, I started painting today. I had a sprayer I bought from another neighbor who said she didn't like it. That should have been my first clue. But I'd used a sprayer before and it went well, so I assumed the neighbor's problem was operator error or personal preference. No, it was the sprayer, which sprayed paint from my hair to the grass and got a little on the garage, then dribbled paint for a few minutes after shutting it off, which was usually when the extension cord fell off. Maybe Recycle Force will take it.

Brushing paint on the whole garage would be too much work. My neighbor ended up doing that, but she's more energetic than I am. What about a roller? I'd never seen anyone use a roller outside before, but the internet said yes, that's a good way to paint clapboard siding. I measured the width of the boards, bought a roller about that size, and even found a paint pan to fit it. I started painting with it--and the paint went where it was supposed to go. After I put some Mighty Fixit on the handle for better grip, it was even easier.

The sun set on me, but I kept working. I don't have much energy in the middle of the afternoon, so I didn't get much done then. But another neighbor loaned me his light and I finished. The first coat of tan is finally on. 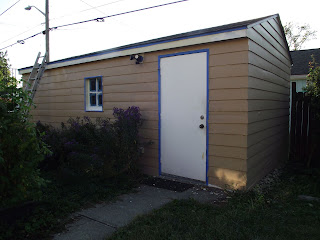 I had to use some hydrocortisone today. Next time I have a busy day of physical work, I may try eating a little bit more carbohydrate, since it seems to help.

Lowcarb team member said…
"The first coat of tan is finally on" and it looks good Lori, well done.

Lori Miller said…
Thanks, Jan. Maybe the county assessor will upgrade its condition from F after it's finished.
September 27, 2020

August 18, 2020
Five minutes, and lunch is ready!1/2 T butter1/4 c sliced mushrooms1-1/2 c stock1/2 c chopped cooked chicken (no skin)2 T nacho cheese2 T salsaIn a small soup pot, melt the butter over medium-low heat and cook the mushrooms. Chop the chicken while they're cooking. Add stock and chicken to pot and heat. Stir in the cheese and salsa and serve (or pack up for lunch).