Chicken Fencing for the City

August 25, 2013
Living in the city presents some problems with housing chickens. Chicken coops are expensive and yet so tiny that they seem like six-chicken CAFOs. Electric fencing is forbidden. Regular fencing is hard work to build, and it's permanent. If the chickens don't work out, you're stuck with a fence you probably won't need or want.

Living in the city presents some advantages, though. The biggest, toughest predators are dogs; aerial predators like owls and hawks probably don't hang around your place. And the city itself can be a source of inspiration for solving your problems.

Like free-range chickens, festivals and construction sites have to be fenced off. Around here, we use portable chain link fencing. Taking a cue from that, I built a six-foot by four-foot freestanding fence panel out of scrap wood and wire fencing. 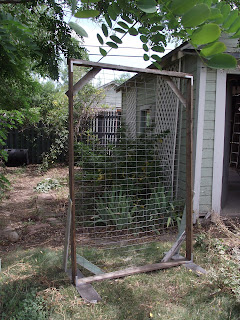 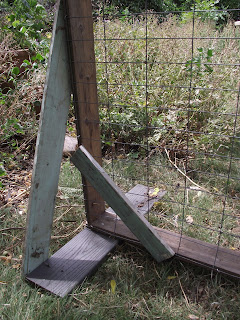 I used 1/2" x 3s to make a 6' x 4' box, joining the pieces with metal angle braces that sit on the edge (see top photo). I flipped the box over and put on the fencing using U-shaped stapled that have to be hammered in. Next, I hammered in diagonal braces cut to 15-1/2" inches to make the box secure. I screwed the box to 2' plastic decking boards, then nailed two diagonal braces onto the outside of the box and the decking boards.

I will probably replace the 2' decking boards with 3' or 4' boards to make the panel harder to tip over. Two-foot boards would probably be fine for a freestanding trellis or as a barrier against a little dog, but my dog Molly is a 68-pound brute who goes berserk around birds. I'll change the boards outside so I don't end up with a panel I can't get out of my garage. You could put a board across the middle if you plan to move the panel very often.

I'll probably also replace the nails with screws. Some of the nails came loose while I was moving the panel. Since the panel is a little unwieldy, I don't suggest making it any larger than 4' x 6'.

Lowcarb team member said…
Wishing you luck with your 'chicken project' I'm sure you'll get it sorted.

Lori Miller said…
Thanks! I just found a bunch of scrap lumber (old fencing) in a nearby alley. I may be able to do this without spending much money at all.
August 25, 2013