Knockout! Right in the Bread Basket

September 09, 2011
Lennox Lewis is gonna win that fight. Nobody's gonna get in the ring with Mike Tyson unless they know they can knock him out. -Bud Miller, my father 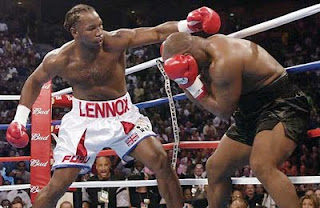 It was the most hyped boxing match of 2002: Mike Tyson, the boxer who once bit off an opponent's ear in the ring, finagled a boxing license in Tennessee and took on Lennox Lewis. My father called that fight: Mr. Lewis looked serene when he knocked out Mr. Tyson in the eighth round. Mr. Lewis knew both himself and his opponent, something that hardly anyone interested in the fight seemed to consider.

And so it's been lately with contenders who spout the healthy whole grains/eat less move more/low fat dogma on the internet in forums that allow responses. The priests of nutrition don't seem to anticipate a bunch of Lennox Lewises, who know every move of their game, climbing into the ring and pounding them.

Apparently, the nutritional priests don't talk to each other or pay attention to each other's work, either. Awhile back, there was the Hope Warshaw rout, to name one instance of dumb "expert" advice drawing a virtual angry and intellectually muscular mob. That should have been a clue to the people at the blog Six Servings by the Grain Foods Foundation. They were quietly publishing junk science and marketing fluff when they decided to take on cardiologist William Davis, MD, author of Wheat Belly:  Lose the Wheat, Lose the Weight and Find your Path Back to Health. The post called a wheat-free diet a "fad" and said that cutting out "one specific food" is "dangerous." They called Dietary Guidelines for Americans the "gold standard of scientifically sound nutrition advice."

At this writing, there are 94 responses to the post, citing the post's logical fallicies, Dr. Davis's success in helping patients, facts about wheat's lack of nutrients, clinical studies showing wheat's disease-causing properties, wheat's ability to send blood sugar over the moon, the common-sense observation that you can get nutrients from better foods, and people's own success on a wheat-free diet. Somebody mentioned the fact that there's no scientific basis for the USDA guidelines; others brought up anthropological evidence that humans were healthier before they started eating grains. Round one goes to Dr. Davis and his fellow travelers.

Gluttons for punishment, the Six Servings people made a follow-up post, mostly appealing to various authorities and experts. They didn't accept Dr. Davis's challenge to a public debate. Do I need to mention they got shellacked by the wheat-free commenters? Even though the Six Servings people don't seem convinced of anything but wheat's goodness (what did you expect?) I give round two to Davis et al. The victory here isn't in getting industry flacks to admit they're wrong, but in thinking clearly for ourselves and winning back our health.