I've been nostaligic for the days five to ten years back when the worst interaction you might have online was a nasty comment or two. Moderators, who might have to deal with a few hundred comments at most, blocked the trolls if they became too disruptive. Now that Facebook and Twitter are excommunicating people wholesale, maybe we'll go back to smaller, moderated sites and leave the yelling and screaming to the maddening crowds over there.

Dave Rubin asked Tulsi Gabbard today how she'd moderate Twitter. In practice, I don't think it's possible. It's too big with too many users who are completely unhinged and ready to come after you IRL if they don't like what you say. Then there's Facebook, which seemed like a platform for narcissists during the few weeks I used it long ago. They say people used to live in groups of about 150--maybe it's time for virtual communities to return to something closer to that number. Not only was there less troublemaking on smaller sites, but the discussion was better quality.

In states I looked at on the COVID Tracking Project (those from previous posts), there was no spike in deaths or hospitalizations a few weeks after Christmas. If anything, some states saw a dip in deaths around Christmas. But whatever trends that were around before Christmas continued.

About half of medical professionals are refusing to take the COVID vaccine, citing concerns about unknown long-term side effects and, especially among black people, being experimented on. Our healthcare heroes are now cast as morons, drooling while they read vaccine conspiracy theories about growing a third ear on social media--the same social media sites that are purging non-corporate COVID information as fast as they can. Yes, some doctor really did say "grow a third ear." Perhaps rhetorically, but it's clear she thinks people who don't want the vaccine are knuckleheads. 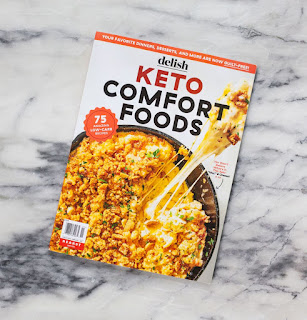 Delish Magazine came out with an issue called Keto Comfort Foods. I've made several recipes from it--bagels, brownies, enchiladas, soup--and they've turned out great. But they gave me terrible GERD! I'd understood GERD or acid reflux was caused by too many carbohydrates making too much gas and pushing up your stomach acid. But I read about a few people getting GERD on keto and even during fasts. So something else had to be at work. The only thing I could come up with was the peristalic motion of your digestive system was off and actually running in reverse. Your muscles need magnesium to work right, and keto diets can purge a lot of magnesium. Sure enough, more magnesium helped.

If you're using Dr. Davis's magnesium water, make sure the milk of magnesia doesn't have sodium hypochlorite, aka bleach. Nobody can find milk of magnesia without it. Instead, I've been taking 400 mg of magnesium citrate per day (spaced out). Fortunately, we have our own chat site where we don't have to cater to anyone's interests but our own.

June 26, 2012
Certain things should be left in the aquarium. Readers may recall my ordeal last Saturday with a migraine headache and a trip by ambulance back to my parents' house. Thanks to one of the paramedics jogging my memory, I researched the almond milk I'd started drinking around the time I quit dairy. One of the ingredients was carrageenan, a substance used to induce inflammation, sensitivity to pain and other problems in laboratory animals. Supposedly, the "undegraded" form is safe for human consumption, but undegraded carrageenan has been found to be contaminated with degraded carrageenan, and there are ways that the digestive system could degrade carrageenan itself. For the past few months, I've felt a little bloated, and was starting to have some mild pain in my lower stomach. I thought it might have been the effects of the antibiotics, oral steroids or decongestant (which gave me an allergic reaction) from back in February. I didn't connect it to the sev
10 comments
Read more

June 25, 2012
A few years ago when I started a low carb diet and started eating sausage again, I found some sausages gave me a headache, but others didn't. At first, eating them was a crap shoot, but I soon found some I couldn't eat (Applegate Farms Organic & Natural Meats) and some I could (McDonald's Restaurants and Ranch Foods Direct, a local pastured meat company). Some of Applegate Farms' products contain carrageenan (a highly processed, seaweed-based food additive used to induce pain and inflammation in research animals). McDonald's and Ranch Foods Direct sausage doesn't contain it. Why put carrageenan in sausage? According to Applegate Farms' website , Carrageenan, which is derived from red seaweed (Chondrus Crispus), activates extracted protein in the meat to help it bind together when formed. As the meat cooks, the heat forms a gel network, increasing moisture retention and improving the sliceability of the product. Without the addition of carrageenan
5 comments
Read more

August 18, 2020
Five minutes, and lunch is ready! 1/2 T butter 1/4 c sliced mushrooms 1-1/2 c stock 1/2 c chopped cooked chicken (no skin) 2 T nacho cheese 2 T salsa In a small soup pot, melt the butter over medium-low heat and cook the mushrooms. Chop the chicken while they're cooking. Add stock and chicken to pot and heat. Stir in the cheese and salsa and serve (or pack up for lunch).  It looks a lot like this stock photo.
4 comments
Read more