February 27, 2018
A photo I took in 2013 was posted by Tom Naughton on Twitter, and some people are wondering if it's a fake. Nope. It's a real hospital menu from Swedish Medical Center in Englewood, Colorado. 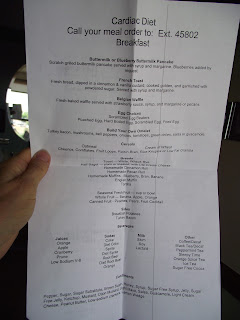 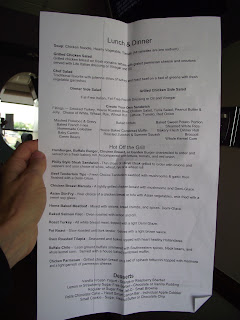 I didn't mention their name before because I have no axe to grind with them and hospitals are all about alike. In fact, I went to their ER in 2015 when I stepped on a nail. I got x-rayed, got the nail yanked out--but I didn't eat their food. Basically, I stay away from doctors unless there's something wrong with me that doctors are good at fixing--like a nail sticking out of my foot.

Besides, why would I take an hour or so to make up a phony hospital menu? In 2013, I had a full-time job (two people replaced me when I left), a long commute, two aging parents who needed my help, and a hundred-year-old house to take care of. My idea of relaxation was playing video games, watching Netflix or taking a nap. And if I were to phony up a menu, I'd at least spell the words right. It's buffalo chili (not Chile, which is a country) and demi-glace, not Demi Glaze, which sounds like a pop star.

It wasn't that long ago that low-fat grains, margarine and sugar were considered a good diet for diabetics, cardiac patients and everyone else. Oh wait, authorities still think they are! And it's authorities who decide what goes on the hospital menu.

Edward said…
Thanks for the info Lori. It's amazing what they serve in hospitals. I think some high school cafeterias are healthier. Not a lot of them, but some. Maybe? :)

I completely agree with you about going to a doctor for what they are good at; if you are already broken and it's *obvious* what that breakage is, they can fix it. Anything else is a crap shoot and they will try to prescribe something for it.
March 01, 2018

Lori Miller said…
What was even worse was that the hospital served my mother (a T2 diabetic) high carb food, then didn't give her her insulin.
March 01, 2018